Professor Satoshi Matsuoka, of the Tokyo Institute of Technology (Tokyo Tech) researches and designs large scale supercomputers and similar infrastructures. More recently, he has worked on the convergence of Big Data, machine/deep learning, and AI with traditional HPC, as well as investigating the Post-Moore Technologies towards 2025.

He has designed supercomputers for years and has collaborated on projects involving basic elements for the current and more importantly future Exascale systems. 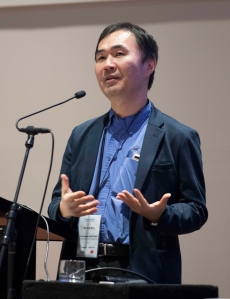 Abstract
With rapid rise and increase of Big Data and AI as a new breed of high-performance workloads on supercomputers, we need to accommodate them at scale, and traditional simulation-based HPC and BD/AI will converge.
Our TSUBAME 3 supercomputer at Tokyo Institute of Technology became online in Aug. 2017, and became the greenest supercomputer in the world on the Green 500 ranking at 14.11 GFlops/W; the other aspect of TSUBAME 3, is to embody various Data or “BYTES-oriented” features to allow for HPC to BD/AI convergence at scale, including significant scalable horizontal bandwidth as well as support for deep memory hierarchy and capacity, along with high flops in low precision arithmetic for deep learning.

Furthermore, TSUBAME 3’s technologies will be commoditized to construct one of the world’s largest BD/AI focused and “open-source” cloud infrastructure called ABCI (AI-Based Bridging Cloud Infrastructure), hosted by AIST-AIRC (AI Research Center), the largest public funded AI research center in Japan. The performance of the machine is slated to be several hundred AI-Petaflops for machine learning; the true nature of the machine however, is its BYTES-oriented, optimization acceleration in the memory hierarchy, I/O, the interconnect etc, for high-performance BD/AI. ABCI will be online Spring 2018 and its architecture, software, as well as the datacenter infrastructure design itself will be made open to drive rapid adoptions and improvements by the community, unlike the concealed cloud infrastructures of today.

Finally, transcending from FLOPS-centric mindset to being BYTES-oriented will be one of the key solutions to the upcoming “end-of-Moore’s law” in the mind 2020s, upon which FLOPS increase will cease and BYTES-oriented advances will be the new source of performance increases over time in general for any computing.

Satoshi Matsuoka has been a Full Professor at the Global Scientific Information and Computing Center (GSIC), a Japanese national supercomputing center hosted by the Tokyo Institute of Technology, and since 2016 a Fellow at the AI Research Center (AIRC), AIST, the largest national lab in Japan. He received his Ph. D. from the University of  Tokyo in 1993. He is the leader of the TSUBAME series of supercomputers, including TSUBAME2.0 which was the first supercomputer in Japan to exceed Petaflop performance and became the 4th fastest in the world on the Top500 in Nov. 2010, as well as the recent TSUBAME-KFC becoming #1 in the world for power efficiency for both the Green 500 and Green Graph 500 lists in Nov. 2013. He is also currently leading several major supercomputing research projects, such as the MEXT Green Supercomputing, JSPS Billion-Scale Supercomputer Resilience, as well as the JST-CREST Extreme Big Data. He has written over 500 articles according to Google Scholar, and chaired numerous ACM/IEEE conferences, most recently the overall Technical Program Chair at the ACM/IEEE Supercomputing Conference (SC13) in 2013. He is a fellow of the ACM and European ISC, and has won many awards, including the JSPS Prize from the Japan Society for Promotion of Science in 2006, awarded by his Highness Prince Akishino, the ACM Gordon Bell Prize in 2011, the Commendation for Science and Technology by the Minister of Education, Culture, Sports, Science and Technology in 2012, and recently the 2014 IEEE-CS Sidney Fernbach Memorial Award, the highest prestige in the field of HPC. 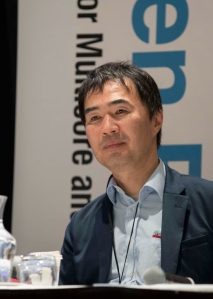